The European health report is a flagship publication, published every three years. The 2012 report set the baseline for monitoring progress towards the six targets of the European policy framework, Health 2020. 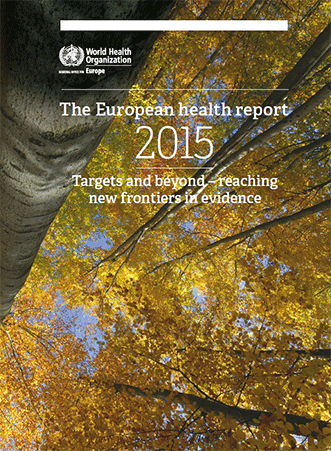 The 2015 report presents the progress made since the baseline. An assessment of the available data on all the targets reveals that the European Region is on track, but much potential remains for further health gains and reductions in inequalities.

The 2015 report gives an update on the challenges in measuring and reporting on progress towards Health 2020, particularly in measuring well-being, and proposes new sources of qualitative evidence to describe and monitor well-being.

Facts and figures are not enough to report meaningfully on what it means to be healthy and well in Europe. The 2015 European health report argues that new forms of evidence are necessary to fully capture this. Stronger international collaboration is required to advance the agenda for health-information research and development in the Region.

The 2015 report shows that improvements in health continue throughout the European Region, and some of the inequalities in health between countries, notably in life expectancy and infant mortality, have decreased in recent years. In real terms, however, these differences still amount to 11 years of life and 20 healthy babies per 1000 live births between the best- and worst-performing countries. Absolute differences between countries remain unacceptably large, especially for indicators linked to social determinants of health. In addition, the report clearly shows that the European Region still has the highest rates of alcohol consumption and tobacco smoking in the world.
The 2015 report continues the discussion started by the 2012 report on the concept of well-being within the Health 2020 framework.

It presents the first results on subjective and objective well-being in the context of Health 2020, and explores innovative ways policy-makers can address the challenge of measuring it; examines how culture may influence health and well-being; and looks at how WHO could use information from non-traditional sources – for example, drawing on history and anthropology –to gain a more complete picture of well-being in Europe.

Health 2020 includes notions such as community resilience and a sense of belonging and empowerment, and requires fresh thinking about health information to ensure that the evidence collated meets the needs of the policy.

The entirety of the information chain is fraught with challenges: from data collection to analysis, interpretation and reporting, and the use of information in policy-making. This report calls for broad international cooperation to focus attention and effort on harmonizing, setting standards for and creating evidence fit for use in the 21st century.