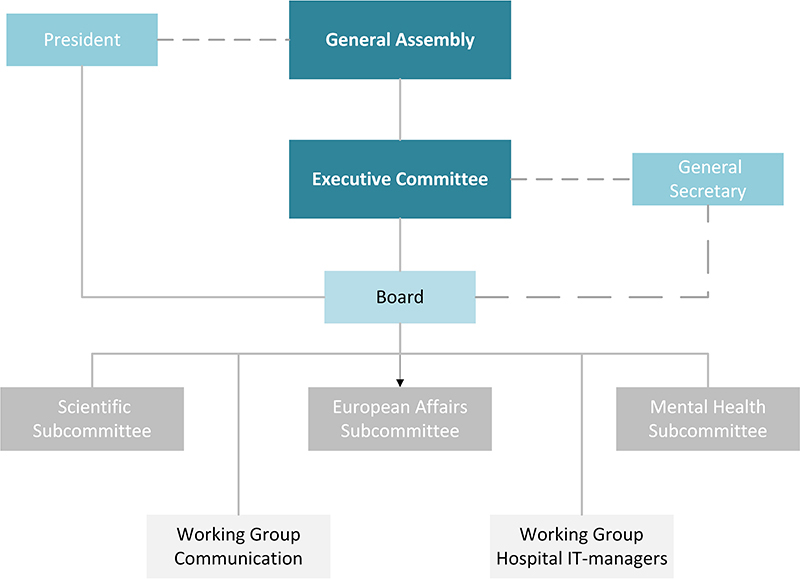 It is composed of ordinary and associate members. Ordinary members are eligible  to vote. Each country represented has four votes. It takes place once a year at different locations at one of the member countries. The General Assembly is the supreme body of the EAHM. It approves the accounts and the budget. It elects the members of the Executive Committee and the Board as well as the Presidents and Vice-Presidents. It speaks also out on the planned activities and on issues of hospitals and their management.

The President, being the legal representative of the EAHM, is elected by an Ordinary General Assembly for a period of 4 years.

The current President of the European Association of Hospital Managers (EAHM) elected for the next four years (2022-2026) is Ms Lucy Nugent from Ireland. She was elected on May 2022 at the 52nd General Assembly held in Vilnius, Lithuania.

Lucy Nugent is the CEO of the Tallaght University Hospital in Dublin since January 2019, a large academic teaching hospital with a staff of over 3,500 from 58 different nationalities and a budget of €275million (Deputy CEO from June 2016 to January 2019).

At the same General Assembly, Dr Josef Düllings, was elected as Vice-President of the EAHM. Dr Düllings is the CEO of the St. Vincenz Hospitals in Salzkotten and Paderborn, Germany. He is also the President of the German Association of Hospital Directors (VKD)

The Secretary General is appointed by the Executive Committee for a term of 5 years. He coordinates the daily operation of the EAHM and renders account to the Board.

Invited to the Board Meetings

President of the SC Mental Health

President of the Working Group Communication

President of the IT Working Group

The Executive Committee consists of:

Members of the Executive Committee for the term 2022-2026

Secretary General
This website uses cookies to improve the user experience and to perform visit statistics. By continuing to browse this site, you agree to the use of these cookies. Click here to get more information.