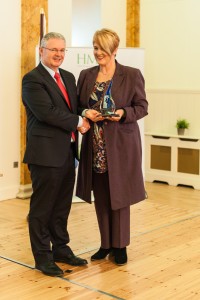 Alison’s project was titled ‘Promoting improved access to dental care for people living with haemophilia in Ireland and encouraging a culture of oral health promotion within the teams that treat them’.

Alison received her award on 7 July, 2015 following presentations by the seven finalists to the National Judging Panel. Later in the evening, the overall winner was announced.

This event was held in the beautiful surroundings of The Pillar Room, Rotunda Hospital. Standing before the National Judging Panel and an audience of their peers to make their presentations, each finalist demonstrated commitment and passion for their project. Every finalist had already been successful at the regional final stage, thus earning their place at the national stage. The range of projects presented was diverse, and provided a wonderful learning opportunity for those who were there.

It was a wonderful afternoon of celebration of some of the projects and research which are top class in our health system and a positive example of some of the initiatives being implemented which are bringing real and transformative change.

Source : http://www.hmi.ie/award/
This website uses cookies to improve the user experience and to perform visit statistics. By continuing to browse this site, you agree to the use of these cookies. Click here to get more information.