Dear Sir and madam, does the creeping economisation of care for the elderly necessarily mean a deterioration of services? Discuss this question with leading international experts within the framework of the congress week on the topic of “We’re living longer …” from 9th – 14th May 2016 in Villach.

Care for the elderly is under just as much financial pressure as it is under resource-related pressure – just like the healthcare system in general. Budgets are being cut and managers, as well as healthcare staff, are finding it equally hard to offer a consistent, if not a better, quality in the care of senior citizens in the intramural and extramural sectors. 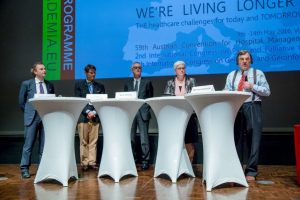 Dr. Michael Hudson, one of the leading economists worldwide, has been working on finding out what effect increasing life expectancy has had on the healthcare system and pension costs since 1968. “Based on my analyses, some politicians in the American government have even sought to reduce the use of expensive technology, and also to cancel dialysis treatments, and to only offer these to well-off patients on offshore islands”, Hudson says. This now raises the following question: to which extent can reforms achieve financial and qualitative improvements, and from what point on will only the rich be able to afford high quality care? His work in the field of economics has made him one of the most senior advisors to the White House and to nearly all governments around the world, as well as to the stock exchange. He is President of the Institute for the Study of Long-Term Economic Trends (ISLET), a recognised Wall Street financial analyst, professor at the University of Missouri-Kansas City, and a well-known author of numerous publications, as well as popular guest speaker at worldwide conferences. This is the man who warned of the implosion of the property bubble years before it happened. In front of the participants at the 59th Austrian Convention for Hospital Management on 10th May 2016 at the Congress Center in Villach, he will address the key question of whether the creeping economisation of healthcare means, at the same time, a deterioration of that system.

Dr. Hudson is just one example of many well-known international experts and speakers at the “We’re living longer …” congress week in Villach, in May 2016. Because it is not only the economy which worries today’s healthcare staff – current and, above all, future structural changes as well as specific European and Austrian care topics will also be addressed in Villach. And those who know the traditions of the Sanicademia further training association will also know that numerous well-known speakers from all over Europe will accompany you through these days of listening, thinking and discussions on a variety of disciplines and topics. The best of the best will come to Villach for you in May 2016 and you will be offered the opportunity to think outside the box and to learn from one another. See for yourself and go to www.sanicademia.eu to take a look at the long list of top international speakers.

From 9th to 14th May 2016, for the first time, three previously independent specialist conferences will come together at the Congress Center in Villach under the general headline of “We’re living longer …” to create one, cross-border and interdisciplinary congress week. Sanicademia will be organising the 59th Austrian Convention for Hospital Management for the working group of Carinthian public hospital managers on behalf of the Federal Conference of Austrian Hospital Managers from 9th to 11th May 2016. Following that, Sanicademia will be organising the now traditional medical conferences on the topic of “Ageing”: the 2ndInternational Congress on Pain and Palliative Care on 12th May 2016, as well as the 5th International Congress on Geriatrics and Gerontology, which celebrates its anniversary on 13th – 14th May 2016, and has been inspiring participants from Austria and abroad for 10 years.

Participants will have the opportunity to choose to take part in individual events or the whole week, packed with interdisciplinary lectures, workshops and panel discussions. It is currently possible to book attractive early bird packages on the official congress website, www.sanicademia.eu.